Those beautiful mountaintop vistas? They come with a price tag. And we’re not just talking about blue chip real estate values – high altitude can be hell on your body, even if you’re a paragon of physical fitness. Low air pressure can really curb one’s appetite for alpine hikes, moguls or mountain biking down single-track. If you’re not used to living the high life and your red blood cells aren’t up to snuff, you can easily find yourself short of breath, dizzy, nauseated, dealing with an unusually rapid heart rate or worse. The same goes for your car. It might be a finely tuned piece of machinery, but it feels the effects of high altitude, too. 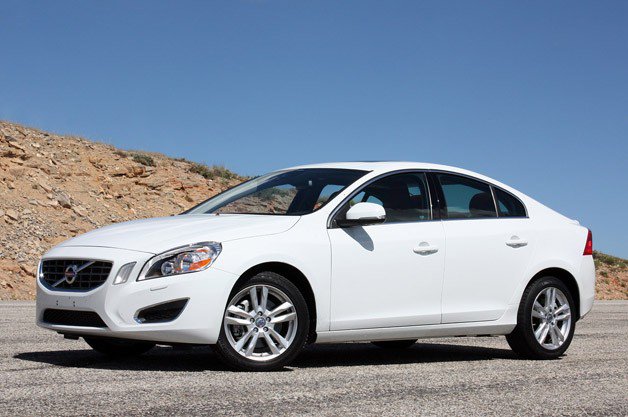 Thank goodness for forced induction. Despite existing for decades primarily in performance-minded cars, the auto industry is just now catching on to the virtues of turbocharged power in real volume – primarily for fuel economy and emissions gains. But the benefits of turbos and superchargers have never been lost on high-altitude motorists. Having a mechanical windsnail lashed to one’s engine helps compensate greatly for thin air in places like Park City, Utah (elevation: 7,000 feet), which is helpful, because that’s exactly where we went to test Volvo’s 2013 S60 T5 with all-wheel drive.

It’s possible for a normally aspirated engine to lose well over 20 percent of its peak power at elevations like this, which can smother the sort of driving engagement that good mountain roads hold almost intrinsically dear. A proper turbo setup can cut that loss in half or even by two thirds. Swedes being no strangers to altitudes, it should come as no surprise that turbo power has long been a staple of Volvo’s powertrain lineup. In fact, Volvo’s current generation S60 is rolling into its third model year as the company’s best-selling model, and it’s had turbo power since birth. So why are we revisiting it now? Because Volvo has finally fitted its T5 volume model with all-wheel drive, tweaking the in-line five-cylinder to boot.

While the S60’s bodywork remains the same for 2013, Volvo has updated the turbocharged five-cylinder engine, which once again produces 250 horsepower and 266 pound-feet of torque in normal driving (a 10-second overboost function swells torque output to 295 pound-feet in gears two through six). Despite no change in the power figures, Volvo has added a new crankshaft and pistons, upped the compression ratio from 9.0:1 to 9.5:1 and reduced internal friction, all with the aim of improved drivability and performance. Also new is a modified engine management system that expands the engine’s max torque range to 4,200 rpm, and there’s a reprogrammed six-speed automatic transmission for quicker cog swaps in Sport mode. The S60 T5’s 0-60 time thus tumbles from 6.8 seconds to 6.4 in front-drive guise, or 6.6 for all-wheel-drive models like ours. 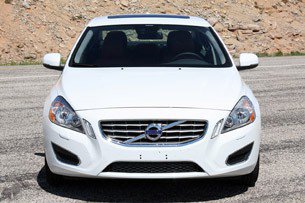 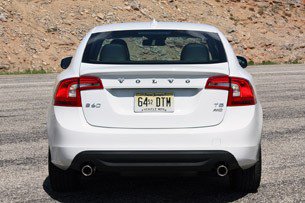 To handle the power, Volvo is offering Haldex’s fifth-generation AWD with the T5 engine for 2013 as a $2,000 option. The system is lighter than previous iterations by approximately five pounds, which helps reduce rotating mass and thus increase fuel efficiency. In normal driving, torque is distributed 95/5-percent front/rear, but depending on traction conditions and throttle input, power can be divvied up to 50/50, as under a hard launch.

Even with altitude-associated losses, our S60 pulled hard as we drove over and down the area’s mountains, eventually wending our way into Wyoming on a long and beautiful drive route before heading back into the Beehive State. We observed plenty of power on hand throughout the rev-range – peak torque shows up at 1,800 rpm. There’s very little turbo lag and enough power that we have trouble imagining paying more for the nose-heavier, thirstier T6 and its 300-horsepower 3.0-liter I6.

Despite the inclusion of Volvo’s Corner Traction Control system (read: electronic torque vectoring technology), a handful of very tight switchbacks were not the S60’s forte, as the front end washed out safely and predictably with understeer. Even so, the Volvo was otherwise at home on the Utah range, with well-controlled body motions, good steering response from the 17-inch Continental rubber and a general feeling of precision. Bombing down the Wasatch mountains’ well-maintained road surfaces was a joy – the S60 proved surprisingly in its element stringing together lilting curves and off-camber corners, feeling lighter than its 3,700-pound curb weight would suggest. The chassis was similarly accomplished over everything from freeway expansion joints to cattle grids and railroad crossings, the modestly sized 235/45-R17 rubber offering adequate sidewall compliance to preserve ride quality.

Despite the T5’s odd cylinder count, the engine’s sound wasn’t unpleasant, or even particularly characterful, but it was nonetheless fun to keep the tachometer in its upper reaches with the +/- gate, even if the transmission was smart enough to leave alone in its Sport detent when hammering on. That said, the continued omission of paddles remains a curious one for Volvo’s self-described "naughty" sport sedan. They were particularly missed up in the mountains, where engine braking is often desired and sheer drop-offs give one added incentive to keep both hands on the wheel. A manual transmission option would be nice, too – it’s absent on the entire S60 range, in contrast to rivals from Acura, Audi, BMW and Infiniti that all offer some sort of six-speed manual.

The S60’s nicely quiet interior has remained unchanged since introduction, and that’s a good thing. Oh, there’s a bizarre new gearshift lever capping the six-speed automatic for 2012 (complete with a cheap-looking translucent plastic PRNDL pictogram), but otherwise, the cabin is the same Scandinavian minimalist cocoon it’s always been. Our test car arrived sewn up in stunning Beechwood brown/orange leather, a bold choice that did a fine job of livening up what might have otherwise been too severe of an aesthetic. The driver-canted floating center stack remains, too, with its funky asymmetric air vents but well-thought-out pictogram HVAC controls. The occasionally fiddly stereo/vehicle settings menu system has returned, too, but we’ve found you get used to their operations quickly in non-navigation models like this one. The rear seat remains a bit tight for adults, but on the whole, accommodations are no worse than the BMW 3 Series or Mercedes-Benz C-Class, among others.

Even though the S60’s gearbox still only has six ratios, the all-wheel-drive S60 is in the thick of the fuel efficiency hunt. Our AWD T5 is EPA rated at 20 miles per gallon in the city and 29 on the freeway, while the FWD model nets 21/30 figures, an increase of one mpg. Unlike its competitors, however, the Volvo accomplishes this on regular fuel – its foes either recommend or require premium hooch to get their power numbers.

This being a Volvo, safety systems are predictably front-and-center, with the usual alphabet soup of electronic minders joined by standard City Safety (read: collision detection with auto brake), and option packages that include everything from Drive Alert Control (drowsiness sensor) and LDW (Lane Departure Warning) to automatic high beams and RSI (Road Sign Information) detection, a system that uses the forward-facing camera to read posted limit signs and display the results in the instrument cluster.

Officials tell Autoblog that the company has sold some 45 percent of S60s with all-wheel drive thus far, and it reckons it will see a 20-percent improvement in the model’s sales by simply adding grips-at-all-fours technology to the T5. We don’t doubt they’re right, especially since there’s an added windfall: The five cylinder isn’t just cheaper, it’s also better to drive – and that’s something you don’t have to be high in Utah to see the value in.