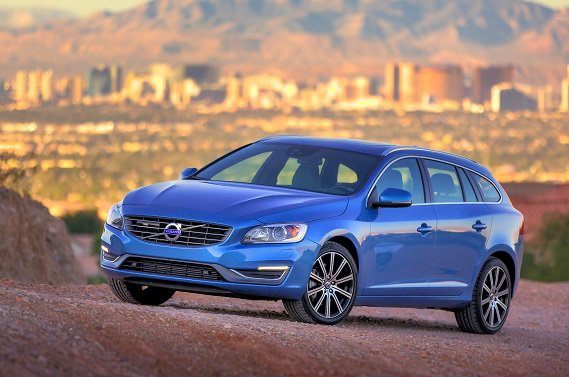 Associate Editor Michael Febo: I’ve always had trouble putting my finger on Volvo’s specific aesthetic. The designs are clean and simple, yet so functional. It finally materialized in front of me while driving the latest Swedish offering through the historic site where Captain James Tiberius Kirk will give his life defending the universe and time continuum as we know it from Soran 357 years from now. In between the cragged red clay spires of Veridian III I realized the new V60 Sports Wagon shares the same minimalist artistry as a galaxy class starship.

The 2014 S60 received a slight interior and exterior refresh, but for 2015 it’s joined by the V60 wagon. Both are available with Volvo’s new Drive-E engine line. The E stands for environment or maybe efficiency, or something other than electricity or Enterprise, which would be far too obvious. Right now, the engine line consists of two 2.0-liter direct injection I-4s. The T5 uses a single turbocharger to produce 240 hp and 280 lb-ft of torque, while the T6, available in the S60, is the same engine but with a larger turbocharger augmented with a supercharger to add torque at low RPM. The T6 produces 302 hp and a smooth and seamless 295 lb-ft of torque. For this year at least, the T5 is the only Drive-E option in the V60, but we wouldn’t be surprised if the T6 finds its way into the car at some point down the road. Eventually the Drive-E line will include four gasoline and four diesel engines that may or may not make it to the U.S. Volvo will also add electric motors to the equation, creating all-wheel-drive versions with electric-only rear axles. Those will most definitely make it here. 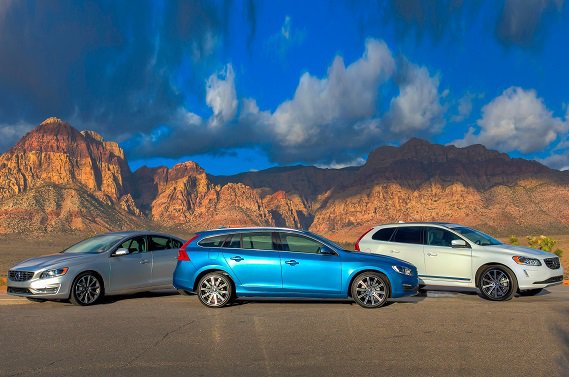 We began our drive in the V60 on the Las Vegas strip, famous for gambling, scale versions of global tourist attractions, and being destroyed during Tim Burton’s 1996 Martian invasion. The wagon is surprisingly quiet, even with our Sport package-equipped cars packing a bit more sportiness than expected. The 19-inch wheels and lowered ride height, along with stiffer spring, dampers and anti-roll bars, add up to ride and handling equivalent to a sports sedan’s. The Sport package also adds some of the best sports seats available anywhere, plus paddle shifters for the eight-speed automatic. Acceleration is quick, with plenty of oomph at the low end. With the transmission in Normal mode it hurries to get into the tallest gear possible, making a downshift (or three) necessary for a big burst of thrust. In Sport Mode, the shifts are less frequent, keeping the engine spinning happily a few thousand RPM higher. Turbo lag is virtually nonexistent, and shooting for openings on the packed Las Vegas freeways was effortless. The performance is impressive especially when you consider Volvo is claiming a freeway rating of 37 mpg. For comparison, BMW’s 328i Xdrive Sports Wagon carries an EPA-certified 33 mpg highway. 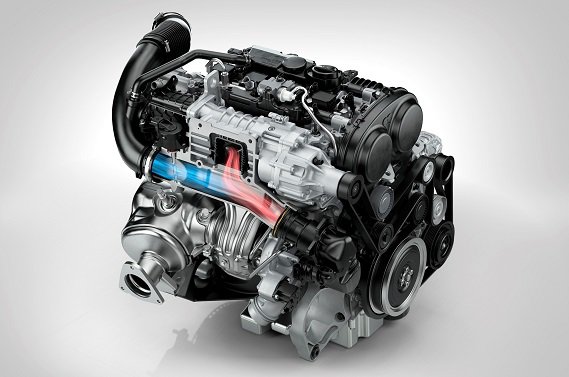 The steering is smooth and damped with good on-center resistance that builds as soon as you add input. There certainly isn’t a Porsche-like level of feel here, but I’m not expecting that. The brake pedal is firm; the feel and travel is well into the better half of the sedan market. The V60 won’t shock you with one specific driving attribute, but the entire package is solid and honest. The dash now houses a new configurable digital gauge cluster that offers different modes depending if you are in a sporting or economical mood. The center console has the typical HVAC control with intuitive mannequin push buttons for flow control. Less intuitive are the small black buttons — for navigating the infotainment system — arrayed around the HVAC controls. 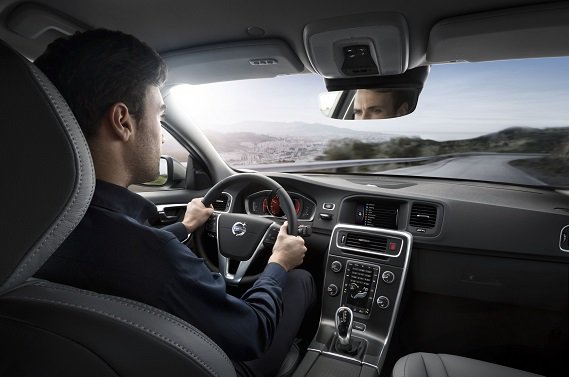 While longtime Volvo fans will find the driving experience familiar, drivers new to the brand will likely be shocked at these invigorating cars from the Swedish box company. While we’re on the topic of rolling refrigerators, Volvo says it is finished making wagons that resemble shipping containers. From now on, its wagons will be sexy, styled, and sleek. Again, long time Volvophiles are likely putting pen to paper to remind us of the T5R and other awesome Swedish speed haulers. That last statement was Volvo’s and not ours.

While we love the front of the cockpit, and the rear cargo bay is gigantic, the rear seats feel a bit tight. This is considered a compact car, but it feels more compact than the BMW or even a Jetta. The Volvo does feature a fold-flat front passenger seat. I was told it was created by a Volvo designer who insisted on being able to fit his surfboard inside the car. (When I was on a VW launch, the Tiguan interior designer told me they had adopted the folding front seat so Ikea’s longest box would fit inside the smallish SUV.) A lightly equipped V60 T5 Drive-E can be yours for right around $36,000, but you can tack on another 10 grand if you really go crazy with the options. Volvo seems to be off the mainstream’s radar right now, which is a shame for the automaker but maybe not so bad for customers. In Orange County, where Audis, BMWs, and Mercedes are as common as Starbucks, the Volvo still stands out. The driving experience is way above what you probably expect. The new Drive-E engines are world-class and might make you think you’ve skipped ahead a few years to a cleaner, easier-living future. I’ll take mine in Crystal White Pearl with California license plate NCC1701, please.