Volvo may not be the first name you’d think of in racing, but it stands as a dominant force in European touring cars. Before stepping up to the World Touring Car Championship last year, Volvo and its partner Polestar Racing had come to dominate the Swedish Touring Car Championship. While that series has since expanded to all of Scandinavia, Volvo made other plans in switching over to the TTA Racing Elite League. And this is the car with which it will be contesting the new series.

Rather than field the same C30 touring car which Volvo and Polestar had fielded in the STCC and WTCC, the TTA racer revealed here is based (or at least looks like) the S60 sedan. Under that carbon fiber body sits a 420-horsepower V6 driving the rear wheels through a six-speed sequential gearbox and boosted by a similar KERS regenerative braking system as employed in Formula One.

The livery has yet to be finalized, so for now Polestar has decked the S60 TTA out in the same shade of baby blue that makes its other touring cars, that 450-horsepower all-wheel-drive C30 prototype and for that matter the Alonso-era Renault F1 cars so perplexingly devious. Click the image above to view in high resolution and follow the jump for the full press release. 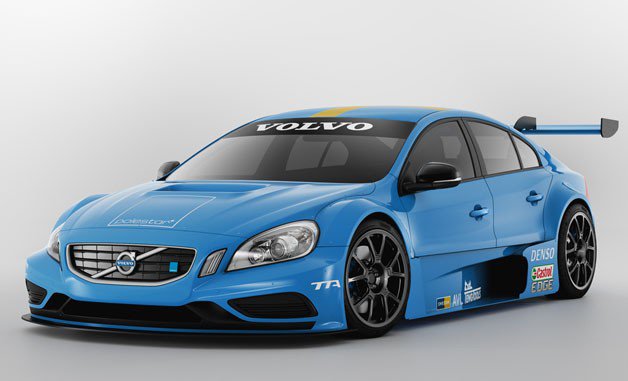 Volvo announced in August last year that they are going to switch to TTA – the Swedish Racing Elite League ahead of 2012 and today the first picture is released of the new racing car. "We have had a big pressure on us from many curious Volvo enthusiasts as it is a new championship and a new racing car. That is why we chosen to reveal the car now. Our final team colors are going to be shown later, but this is our S60 in TTA racing specification," said Alexander Murdzevski, Commercial Director of Volvo Motorsport Sweden.

Volvo is going to compete with four cars in the Racing Elite League with Polestar in two different teams, Volvo Polestar Racing and Volvo Polestar Performance. Three of four drivers are confirmed, Robert Dahlgren, Fredrik Ekblom and Thed Björk. The fourth driver has not yet been named.

"We can’t go in to that today. We are negotiating with three drivers, but we have other things that are more time pressing. Polestar and TTA are conducting the final tests at the same time as we are working on the hybrid system, producing the carbon fibre body shells and calibrating the aerodynamics for all cars in our wind tunnel," said Derek Crabb, Director of Volvo Motorsport.

With three months remaining to the TTA premiere on the 12th of May at Karlskoga, a new future awaits Swedish motorsport with sporting values, tight races and completely new regulations with new and exciting technology. Volvo has supported the idea from the start and has contracted their participation in the championship until 2015 at least.

"Motorsport must be cool, exciting and fair. We must fight our meanest competitors in our best selling models. We must be able to win by doing the best job and it should be easy for importers in the country to change racing car when changing model without the need of a heavy factory programme. We are really looking forward to the TTA – Racing Elite League 2012," said Anders Gustafsson, Managing Director of Volvo Cars Sweden.