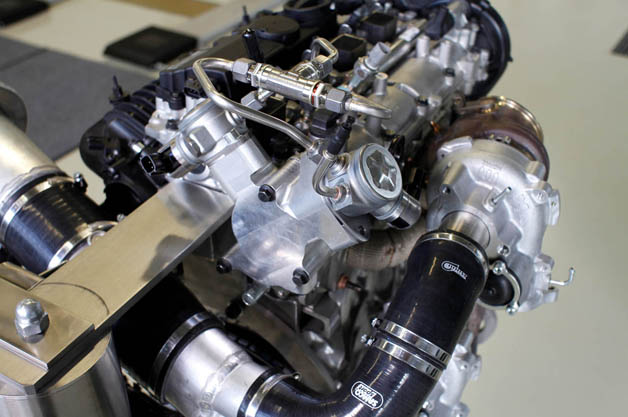 When Volvo lifted the veil on the new XC90 a little over a month ago, it announced that all versions would be powered by one engine design: a new 2.0-liter four-cylinder to be offered in various states of tune. That would range, Volvo said, all the way up to a high-output version with “around 400 horsepower,” but while it wouldn’t specify exact output, now it has.

The new High Performance Drive-E Powertrain incorporates two parallel turbochargers fed by a third electric turbo-compressor. Instead of feeding the cylinders directly, that third unit spools up the twin turbochargers, working together with a dual fuel pump pressurized to 250 bar.

The result is an output of 450 horsepower – far more than the existing 320-hp version and even more than expected. That also works out to 225 hp/liter, far more than the 177 hp/liter boasted byMercedes-AMG high-output turbo four and the 139 hp/liter in the Alfa Romeo 4C. Short of a rotary engine (whose actual displacement is the subject of great debate), you’d have to go up to something like the Koenigsegg One:1(268 hp/liter) to find a higher specific output than what Volvo’s boasting here.

Although Gothenburg is billing this engine as a “powertrain concept,” and has not commented on production applications, we’d be very surprised if this didn’t turn out to be the flagship engine we were promised for the XC90.

Written by Noah Joseph for Autoblog.com